About the single: 'Taming the Wolf' 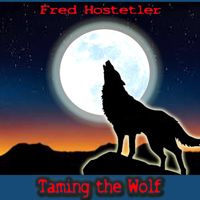 About Taming the Wolf

I loved the blues since listening to the 50,000 watt clear channel giant WLAC- Nashville, Tennessee. WLAC would announce itself as "the nighttime station for half the nation" and woke me up to what was about to happen, the emergence of the Rock n' Roll era. I was a young boy, who knew nothing about what 'Silky Straight' meant and was clueless about Royal Crown hairdressing and pomade. These products sponsored regular blues hours: Randy's Record Mart with "the Hossman" and Ernie's Record Mart with John R. At night after going to bed, I would put my ear up to the old wooden box radio so my parents would not know I was listening to the likes of Howlin' Wolf, Muddy Waters, and other 'race music'. It was fascinating stuff that bent my mind. I had never heard such emotion and feeling in the singing and playing. The earthy lyrics were colorful, catchy, and strange; they described a life of which I was totally unaware. According to Wikipedia, radio historians say that although the music was intended for the Deep South, a few white teenagers were also attracted to the music. Though not near my teen years, I was one of them.

Not long after that, I found my father's old Stella guitar in the attic, picked it up and began to play. I am still playing and enjoying. Blues is heart and soul. It has powered my musical sojourn. It keeps on giving pleasure and sustenance. The song 'Taming the Wolf' is biographical in nature. I wrote it as my personal struggle of self-discovery and mastering mind and body. Now as the #metoo movement has unfolded I find it startling relevant. At the end of the song I sing, "The wolfman cried for the love of women, I'm crying out for what the soul is giving." So not only let there be respect and love for women, but between all genders, castes, creeds and human beings. Let us all live seeking unity in the diversity of the oneness that we are. This is one explanation for the songs' meaning.